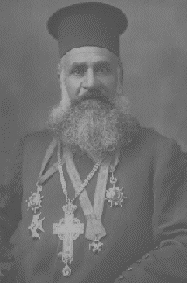 The Very Reverend Father Nicholas Shehadie was born in 1862 and, after his ordination, served the Church in Lebanon.

The 1899 election of an Arab patriarch of Antioch were to have global repercussions and the rift between Greek-speaking and Arabic-speaking Orthodox, particularly after the 1908 transfer of jurisdiction of the ‘diaspora’ from the Church of Jerusalem to the Church of Greece (with the stipulation of exclusive liturgic use of the Greek language).

In 1913, Fr Nicholas was sent to Australia as the Patriarchal Exarch for Australia and New Zealand in order to determine the extent of the problems caused for Arabic-speaking Orthodox. The start of World War I, however, ensured that Fr Nicholas would not be able to return home; rather, his family followed him to Australia.

Recognising the need for a church for Arabic-speaking Orthodox, Fr Nicholas was determined to serve these people, from celebrating Divine Liturgies in people’s houses to deciding to build a permanent structure. In 1920, the NSW state government leased a block of land on the Corner of Walker and Redfern Sts, Redfern, where the first Antiochian Orthodox church was built, and this church was placed under the patronage of St George.

Later, in 1950, this church would be demolished and replaced in 1953 by a church on the Corner of Walker and Cooper Sts, Redfern, which today is the Archdiocesan Cathedral.

Over a number of years, Fr Nicholas was able to welcome his family into Australia. His sons George and Albert, with his daughter Mary, arrived first, followed in 1922 by twins John and Pauline (both 16 years old). He was fully united with his family in 1925 when his wife, Alexandra, arrived with his son Elias, along with son Michael and his family.

In 1934, Fr Nicholas reposed due to an asthma attack at the age of 72. His funeral was held in the church he was so instrumental in building, presided over by His Eminence Timotheos, then the Greek Orthodox Metropolitan of Australia and New Zealand, and Fr Nicholas was buried at Botany Cemetery.